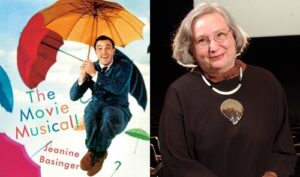 Fascinating figures in the fields of film, rock music, theater, and literature loosen their ties, sip a glass of wine, and (hopefully) tell all in The Mark Twain House & Museum’s A LITTLE HARMLESS FUN series this spring. The four casual, free-wheeling, on-stage conversations will be led by Frank Rizzo, the New York theater critic for Variety and writer for Connecticut Magazine, The New York Times, Hartford magazine, and other publications. Rizzo, who served as the arts journalist for The Hartford Courant for more than 33 years, has covered the Connecticut cultural scene for more than 40 years.

Jeanine Basinger, founder and curator of the Wesleyan Cinema Archives, chair of the Film Studies department at Wesleyan University, and author of many books about the cinema, will chat with Frank on Wednesday, March 4. Basinger, whom The New York Times called “one of the most acclaimed film historians of her generation,” has just published a new book, The Movie Musical! The talk will cover her life and career, the “Wesleyan Film Mafia” in Hollywood – whose members include her former students Michael Bay, Joss Whedon, and others — and her experiences in bringing the papers of such luminaries as Clint Eastwood, Martin Scorsese, Frank Capra, Elia Kazan, Ingrid Bergman, Jonathan Demme, and John Waters to the Wesleyan Cinema Archive. A book sale and signing will follow the talk.

Read a feature story about Jeanine and her famous Wesleyan students in Hollywood Reporter.