The Friends develop and sponsor fundraising events and projects to support the preservation of Samuel Clemens’ Hartford home and his literary legacy.

Join us for our meetings and upcoming special events.

We welcome your participation! Feel free to fill out our membership application. 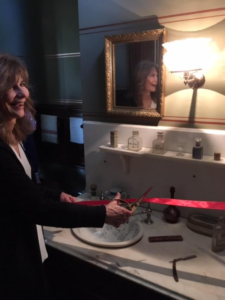 Newly installed antique sinks, a gift from the Friends of the Mark Twain House & Museum, can now be viewed in the Mark Twain House Mahogany Room bathroom.  May 18, 2019, Tracy Brindle, the Chief Curator, shared details on the selection process with members of the  Friends, and Karen Licht, (in picture), President of the Friends, performed the ribbon cutting.

Fran Gordon met with 32 women on September 25, 1967 to formally organize what is now the Friends of the Mark Twain House & Museum.* The group evolved after the president of the Board of Trustees added women to its membership in 1954. They were responsible for caring for museum collections, library cataloging and research, and giving tours of the house.

The Friends began fundraising in 1954 when they assisted with the celebration of Twain’s birthday with the reading of his works by Governor Lodge. As their numbers grew so did the events they developed and sponsored. The yearly financial contribution to the MTH began with a donation of $1,366 in 1970 after a fashion show. In 1975 member trips to locations Mark Twain wrote about became another source of revenue, and by 1976 the group’s contributions exceeded $19,000.

The annual Holiday House Tour began in 1979 and continues to be an annual fundraising event. Private homes, the Mark Twain House, and sometimes public buildings are included in the tour.

In 1995 Kay Hoffman and Marty Flanders organized a fundraiser that is today the MTH&M Gala. It raised $40,000 that year. From 1999 through 2002 the Galas continued to raise over $100,000 annually for the operating expenses of The Mark Twain House.

When the Visitors and Education Center for the MTH was announced, the Friends contributed $30,000 to the capital campaign fund. It is astonishing to realize that since 1967 the Friends, in their fundraising efforts with the Holiday Galas and Holiday House Tours, have contributed more than $1,000,000 to the operating funds of The Mark Twain House.