Join us on Wednesday, February 26, for a reading featuring three of the West End’s most talented — and nicest! — writers!

Ethan Rutherford’s fiction has appeared in BOMB, Tin House, Ploughshares, One Story, American Short Fiction, and The Best American Short Stories. His first book, The Peripatetic Coffin and Other Stories, was a finalist for the Los Angeles Times Art Seidenbaum Award for First Fiction and a finalist for the John Leonard Award from the National Books Critics Circle, and it received honorable mention for the PEN/Hemingway Award. His second collection, Farthest South, will be published by A Strange Object in 2021. 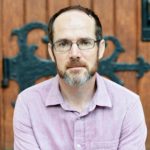 Ciaran Berry’s most recent book is Liner Notes, published by The Gallery Press in 2018. He is also the author of The Dead Zoo, which was a Poetry Book Society Recommendation, and The Sphere of Birds, winner of the Crab Orchard Series in Poetry Open Competition, the Jerwood Aldeburgh First Collection Prize, and the Michael Murphy Memorial Prize. Originally from the West of Ireland, he lives in West Hartford and teaches in the Creative Writing Program at Trinity College.

Clare Rossini’s third collection, Lingo, was published by University of Akron Press. Her poems and essays have appeared in journals and anthologies such as The Paris Review, Plume, Ploughshares, Poetry, and the Best American Poetry series. The Poetry of Capital, an anthology Rossini is co-editing with Benjamin Grossberg, will be published in 2020. Rossini serves as Artist-in-Residence in the English Department at Trinity College in Hartford, teaching creative writing and directing an outreach program that places Trinity students in a Hartford public school arts classroom.

The evenings begin at 5:30 p.m. with light refreshments and a cash-only wine and beer bar. Readings and discussions start at 6 p.m. Authors sell and sign books after their talks.