Crib, Other Clemens Artifacts Restored Thanks to IMLS Grant 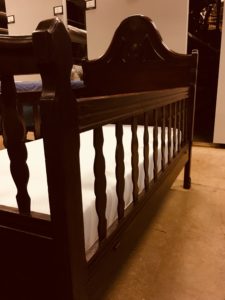 A significant artifact of the Clemens family’s life in their Hartford home will be returning to the Mark Twain House. The walnut crib that was used by Sam’s daughters will soon be put on display in the nursery for the first time in almost twenty years. Critically-needed restoration work was recently completed on the crib by the furniture conservators at the Williamstown Arts Conservation Center in Massachusetts. This work, as well as conservation work on several other collection items, is being funded by a grant from the Institute of Museum and Library Services (IMLS).

The other items that have been restored, to date, include a child’s rocking chair that belonged to Sam’s eldest daughter Susy, which is on display in the library; a slant-top desk that was used by Sam’s wife Olivia, which is on display in Susy’s bedroom; an office chair from the printing office in Keokuk, Iowa, where Sam Clemens worked as a young man, which is part of a collection of items from the office that is on exhibit in the Museum Center; and an intricately-carved wooden glove box that was made by Sam’s youngest daughter Jean. Jean, who had epilepsy, took up wood-carving as a therapeutic activity and became an accomplished artisan. In addition, the grant is funding the restoration of a nightstand that belonged to Sam’s in-laws, the Langdons, and which is part of the beautiful suite of furniture on display in the “Langdon bedroom,” the guest room that Mrs. Langdon used when she visited Hartford.

The museum is grateful for support from IMLS, which has allowed us to preserve these objects, which are irreplaceable pieces of Clemens family history and of our cultural heritage. If you are interested in supporting the restoration of historic objects in the museum’s collections, please contact Director of Development Rosalie Roth at 860-280-3113.