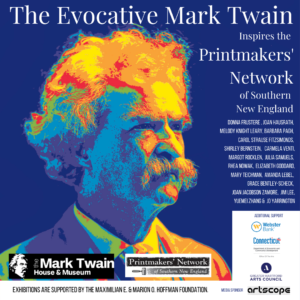 Samuel Clemens, AKA Mark Twain, was as inspirational in his time and as he is in our own. His writings and quotes resonate with today’s audiences through his commentary on many issues of life in the late 1800s. The plight of the African American, the right of women to vote, the horrors of animal testing, the corrupt practices of politicians and the prejudice of Americans to “the other” were as important to Twain as were his marvelous descriptions of life along the Mississippi, travels abroad, sailing voyages around the world, tales of fictional characters like Tom Sawyer and Huckleberry Finn, and the many humorous sketches of real people and places which abound in his work.

The Printmakers’ Network of Southern New England (PNSNE) is a group of contemporary printmakers who for thirty years have worked collaboratively to present themed exhibits, portfolios and educational opportunities to the public. Reflecting different methods of print creation, these artists have challenged themselves to select quotes from Twain’s exhaustive writings to inspire their own work. What has resulted is a masterful exhibit of contemporary printmaking that includes art that links the past with the present, whether by showing the connections between Twain’s work and current issues of social justice, or by connecting Twain’s views on home, health and the human condition with views of our own time. While using their own stylistic and technical methods, these artists have selected themes and commentary that resonate personally. The links they have created between Twain’s time and our own will encourage audiences to make their own connections with the universal truths that can be found in Twain’s writing.

Together, the staff of the Mark Twain House Museum and the PNSNE artists hope that the exhibit inspires discussion and dialogue about controversial issues, that it excites audiences to develop an understanding of the contemporary printmaker’s art, and that it encourages readers to renew their connections with the literary works by Samuel Clemens.

Learn more about the Printmakers’ Network of Southern New England at: PrintMakersNetwork.org

To participate in gallery-related events such as artist-led workshops and virtual talk series, click here! 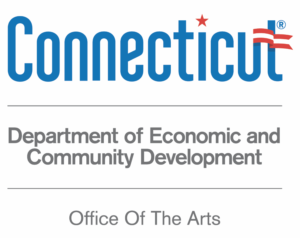 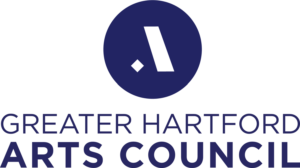 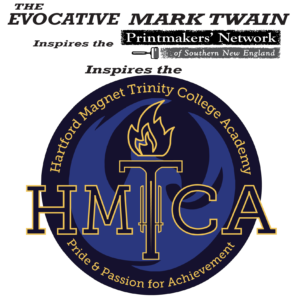 Since 2013, the Mark Twain House & Museum has sponsored an art and essay contest for middle and high school students at Hartford Magnet Trinity College Academy (HMTCA). This ongoing collaboration encourages students’ reading, writing, and artistic skills, and inspires them to express their creative voices through words and illustration. In the exhibit “The Evocative Mark Twain Inspires the Printmakers’ Network of Southern New England” took inspiration from Twain’s words. For this year’s contest, students in the Graphic Design class took their inspiration from those printmakers and used quotes inspiration for their art. Students in the Drawing class were charged with illustrating a famous scene from Chapter XXXIII of The Adventures of Tom Sawyer: Tom and Huck finding the treasure.

There’s always something new and exciting being displayed at the Mark Twain House & Museum. See what’s coming next so you can plan your return visit!

See a listing of our past exhibitions by visiting our exhibit archive page.