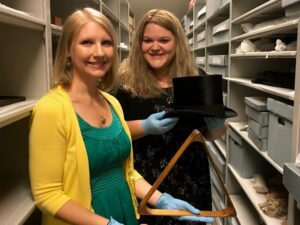 The curators at The Mark Twain House & Museum will be taking your questions via Facebook Live from 1 to 2 p.m. (1700-1800 UTC), on Wednesday, September 12, as part of the worldwide Ask A Curator day.

The curators collect, preserve and interpret the life and times of writer Mark Twain/Samuel Clemens, who lived in Hartford from 1871 to 1891. Items include rare editions of his works,  family correspondence, and period furniture and clothing.

Samuel Clemens lived in the Nook Farm neighborhood and, with his wife Livy, raised three daughters. He wrote The Adventures of Tom Sawyer, Adventures of Huckleberry Finn, and A Connecticut Yankee in King Arthur’s Court, during his Hartford years.

Brindle and Howard will be accepting questions all day Wednesday, September 12, on our Twitter feed (@Twainhouse), and directly during the Facebook Live event. Join us!

Photo: Curators Tracy Brindle (left) and Mallory Howard (right) show Mark Twain’s billiard triangle and a custom-made hat from London with Twain’s signature inside, in the work room storage area at the Mark Twain House & Museum. The curators will answer questions live from the public via Facebook and Twitter on Wednesday, September 12, from  1 to 2 p.m. (1700-1800 UTC), as part of International Ask A Curator Day.