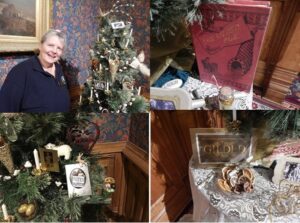 Carol Nicolucci, a Mark Twain House & Museum volunteer, was the head designer of the Mark Twain House Christmas tree included in the Wadsworth Atheneum Museum of Art’s 45th Annual Festival of Trees & Traditions. The festival, and the Twain House tree, are on view at the downtown Hartford museum through December 9, 2018.

The tabletop tree is displayed in the Atheneum’s Victorian-era Goodwin Parlor. This room was rescued during the demolition of the Woodland Street/Asylum Avenue mansion of Major James Goodwin and later restored and installed permanently in the museum.

The Atheneum invited Pieter Roos, executive director of The MTH&M, to submit a decorated Christmas tree for the first time. Pieter requested that the theme of the tree reflect a Gilded Age Christmas celebration that might have taken place while the Clemens family lived in their Hartford home.

Carol’s design includes her own handmade, one-of-a-kind items such as the Victorian-sweets-filled cornucopias, natural fruit and floral potpourri, and a playful mistletoe wand. The tree also features Gilded Age items such as the facsimile of an early edition of Twain’s book The Gilded Age, which he wrote in collaboration with Nook Farm neighbor Charles Dudley Warner. Authentic German candles and candle clips adorn the branches. Halley’s comet, with paired golden stars, is featured both at the top of the tree and in an antique photo at the base. (Halley’s comet appeared in the night sky in 1835, the year of Twain’s birth, and in 1910, the year he passed away.) A golden crown is included as a nod to Queen Victoria (for whom the Victorian Era is named) and Prince Albert for their part in initiating the tradition of Christmas trees worldwide.

“It has been such an honor to work on this project for the Mark Twain House,” Carol said. “The home of the Clemens family is a magical place inspiring people from all over the world who visit. It was that magic that inspired the design of this Christmas tree.”

Thanks to Kensington artist Joseph Roberts for making the Gilded Age book facsimile, engineering Halley’s comet, and antique-aging and gilding the framed photographs in the display. The antique rosewood table on which the tree stands was donated by Michele Tessier, a Mark Twain House & Museum volunteer.