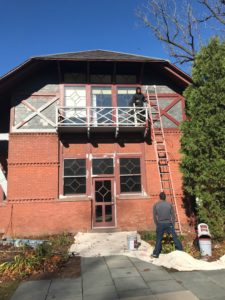 Restoration work is underway on the exterior of Mark Twain’s Carriage House.  To ensure the preservation of this historic building, the museum is having repairs done to its roof and to its intricate woodwork trim, and is having the exterior painted.

The Carriage House was designed by architect Edward Tuckerman Potter at the same time Potter designed the main house, and it was completed in 1874.  It included stalls for the family’s horses, storage for carriages and sleighs, a tool room, an upstairs hayloft, and a barn area that housed the family’s other animals, including daughter Clara’s pet cow Jumbo.  The western side of the building featured a four-room apartment, where Twain’s coachman Patrick McAleer and his wife Mary raised their family.  In a September 1874 letter to his brother, Twain reported: “The stable is all done, & is exceedingly handsome …. Patrick & family occupy large handsome rooms in the stable.  I don’t think I ever saw such a bewitching place as ours is.”

The museum is very grateful to the Richard P. Garmany Fund at the Hartford Foundation for Public Giving for its support, which is enabling this important project.