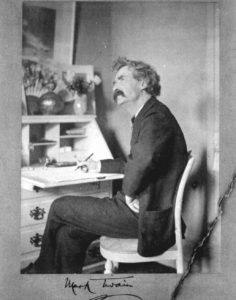 The Mark Twain House & Museum is pleased to announce its long list for the Mark Twain American Voice in Literature Award (MTAVL). An awards ceremony is set for May 15, 7 p.m.
The MTAVL Award, first presented in 2016, honors a work of fiction that best embodies an “American voice” such as Twain established in his 1885 masterpiece Adventures of Huckleberry Finn.
The award will be presented by best-selling author David Baldacci and Executive Director of the Institute for Digital Archaeology Roger Michel Jr., both trustees of The Mark Twain House & Museum and benefactors of the award and ceremony. Baldacci says, “I can think of no better writer to honor in this way than Mark Twain, the man who was the voice of American literature.”
Bill Beverly, who won the top prize of $25,000 for his novel Dodgers in 2017, will also speak. In a letter to the Twain House, Beverly, who wrote a complete draft of his next novel during the year off from teaching that he says the prize money helped fund, noted,“The award was a particularly dear recognition, as I love Twain’s writing and biography and East [the main character in Dodgers] is certainly spiritually kin to Huckleberry Finn. I should say that the financial award has kept food in the pans and socks on the feet around here. It has surely been a blessing, and I thank David Baldacci and Roger Michel…”
The long list includes books published in 2017 and 2018.
The long list includes books published in 2017 and 2018.

American Histories by John Edgar Wideman (Scribner)
John Edgar Wideman’s books include American Histories, Writing to Save a Life, Philadelphia Fire, Brothers and Keepers, Fatheralong, Hoop Dreams, and Sent for You Yesterday. He is a MacArthur Fellow, has won the PEN/Faulkner Award twice, and has twice been a finalist for the National Book Critics Circle Award and National Book Award. He divides his time between New York and France.

An American Marriage by Tayari Jones (Algonquin Books)
Tayari Jones is the author of the novels Leaving Atlanta, The Untelling, Silver Sparrow, and An American Marriage. A member of the Fellowship of Southern Writers, she has also been a recipient of the Hurston/Wright Legacy Award, Lifetime Achievement Award in Fine Arts from the Congressional Black Caucus Foundation, United States Artist Fellowship, NEA Fellowship and Radcliffe Institute Bunting Fellowship.

Days of Awe by A.M. Homes (Viking)
A.M. Homes lives in New York City and teaches at Princeton University. She is the author of 12 books, including the bestselling memoir The Mistress’s Daughter. She is a contributing editor to Vanity Fair; co-executive producer of Falling Water and Stephen King’s Mr. Mercedes.

The Great Believers by Rebecca Makkai (Viking)
Rebecca Makkai is the author of The Borrower, The Hundred-Year House, which won the Novel of the Year Award from the Chicago Writers Association, and Music for Wartime. Her work has appeared in The Best American Short Stories, Harper’s, and Tin House.

A Key to Treehouse Living by Elliot Reed (Tin House Books)
Elliot Reed received his MFA from the University of Florida in Gainesville and is currently living in Spokane, Washington.

Less by Andrew Sean Greer (Hachette Book Group)
Andrew Sean Greer is the Pulitzer Prize winning author of six works of fiction, including the bestsellers The Confessions of Max Tivoli and Less.  Greer has taught at the Iowa Writers Workshop and is a recipient of a NEA grant, a Guggenheim Fellowship, and the 2018 Pulitzer Prize for Fiction.

Lillian Boxfish Takes a Walk by Kathleen Rooney (Picador)
Kathleen Rooney is a founding editor of Rose Metal Press, a publisher of literary work in hybrid genres, and a founding member of Poems While You Wait, a team of poets and their typewriters who compose commissioned poetry on demand. She teaches English and Creative Writing at DePaul University and is the author of eight books of poetry, nonfiction, and fiction.

Lucky Boy by Shanthi Sekeran (G.P. Putnam’s Sons)
Shanthi Sekaran is a writer and educator from Berkeley, California. Her recent novel, Lucky Boy (Putnam/Penguin), was named an IndieNext Great Read, and an NPR Best Book of 2017. Her writing has also appeared in The New York Times, Salon.com, Canteen Magazine and Huffington Post. She teaches creative writing in the San Ffrancisco Bay Area.

Manhattan Beach by Jennifer Egan (Scribner)
Jennifer Egan’s novel The Invisible Circus and her story collection Emerald City were inspired by her backpack travels through Europe, China, the former USSR and Japan. Her novel, A Visit from the Goon Squad won a National Book Critics Circle Award.