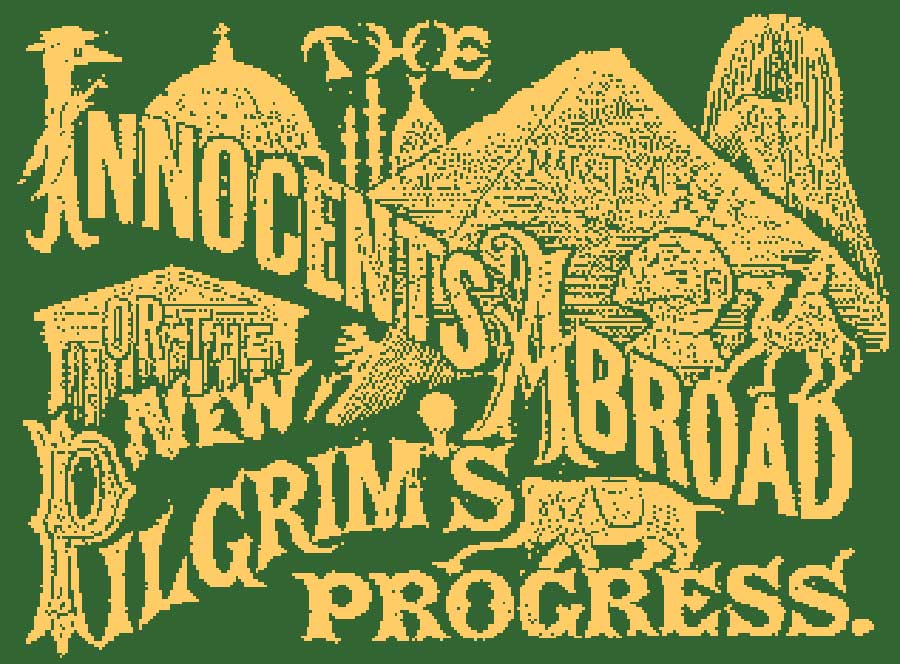 Mark Twain’s account‚ adapted from his own newspaper reports‚ of his adventures traveling through Europe and the Middle East with other Americans. Voyaging on the steamship Quaker City‚ the sightseers first make stops in Europe‚ including Paris‚ Milan‚ Venice‚ Florence‚ Rome and Athens. Their journey culminates in an extended trip through the Holy Land and Egypt. Throughout the book‚ Twain lampoons the meeting of these pilgrims from the New World‚ filled with a pretentious reverence and awe‚ with the hallowed culture of the Old World‚ often represented by Twain as not equaling its reputation. 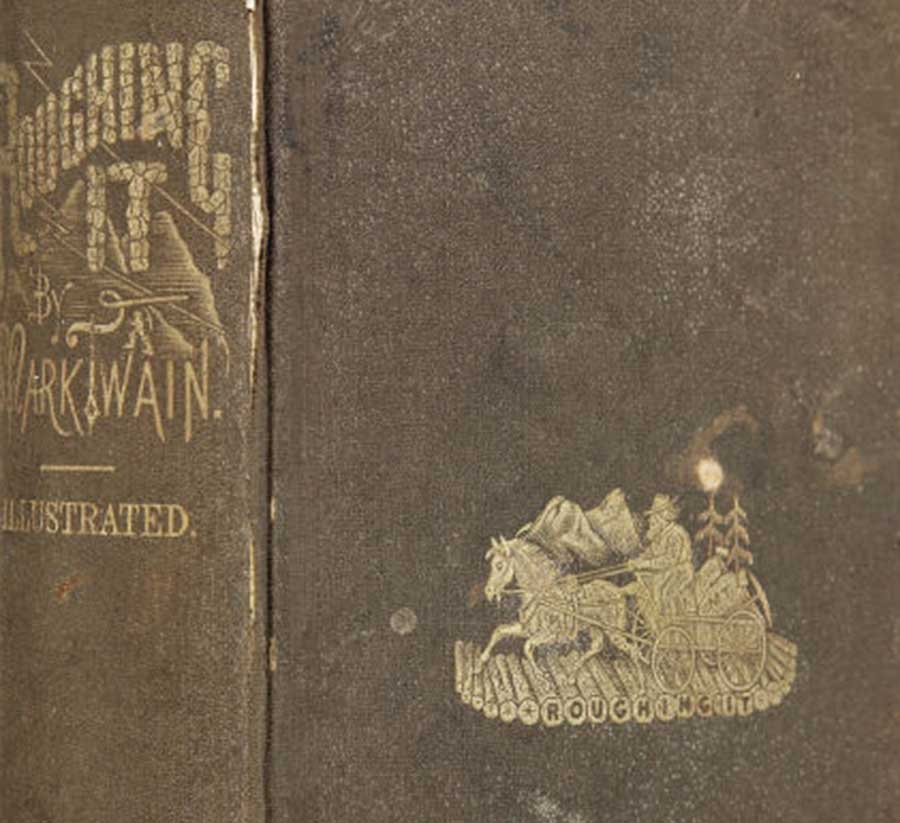 In 1861‚ a 25 year-old Sam Clemens‚ having left his job as a riverboat pilot on the Mississippi River because of the outbreak of the Civil War‚ set out by stagecoach with his older brother‚ Orion‚ for the Nevada Territory. Roughing It‚ part autobiography‚ part travelogue‚ part tall tale‚ is Twain’s account of the people and places he experienced when he and the American West still were young. 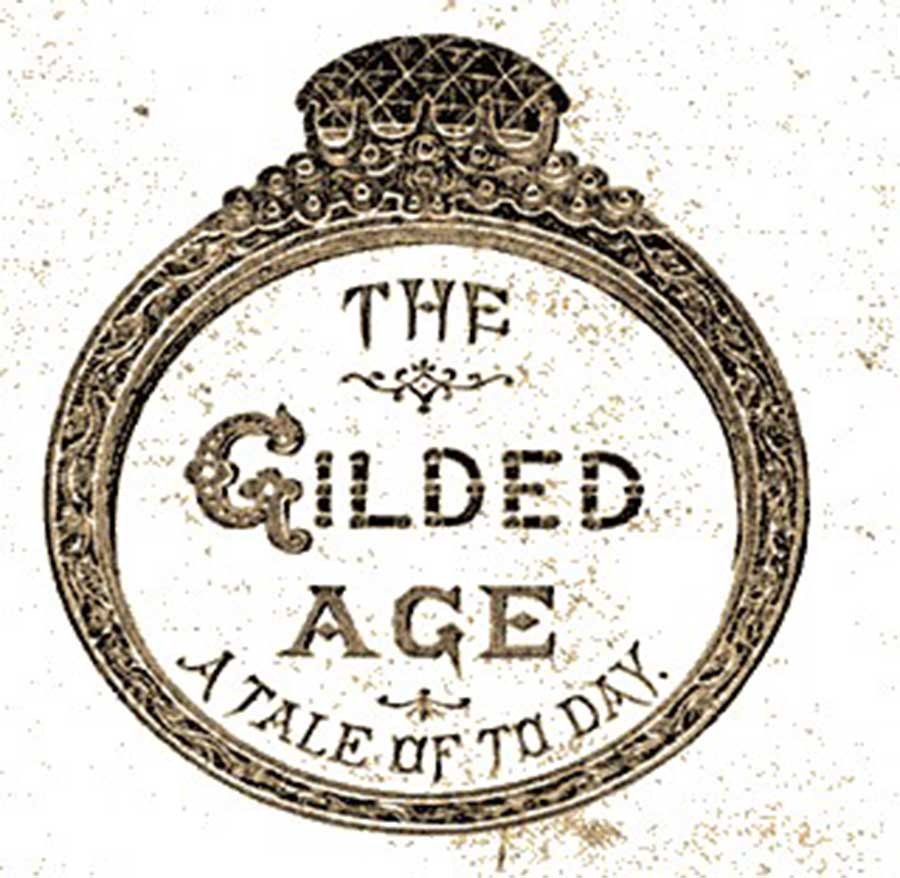 The Gilded Age‚ which Twain wrote in collaboration with his Hartford neighbor Charles Dudley Warner‚ gave its name to the mood of materialistic excess and cynical political corruption that started with the Grant administration in 1869 and prevailed into the 1870s and beyond. To be “gilded” is to be coated in gold‚ so the phrase “The Gilded Age” refers directly to the opulent tastes and jaded sensibilities of America’s wealthy during this period. 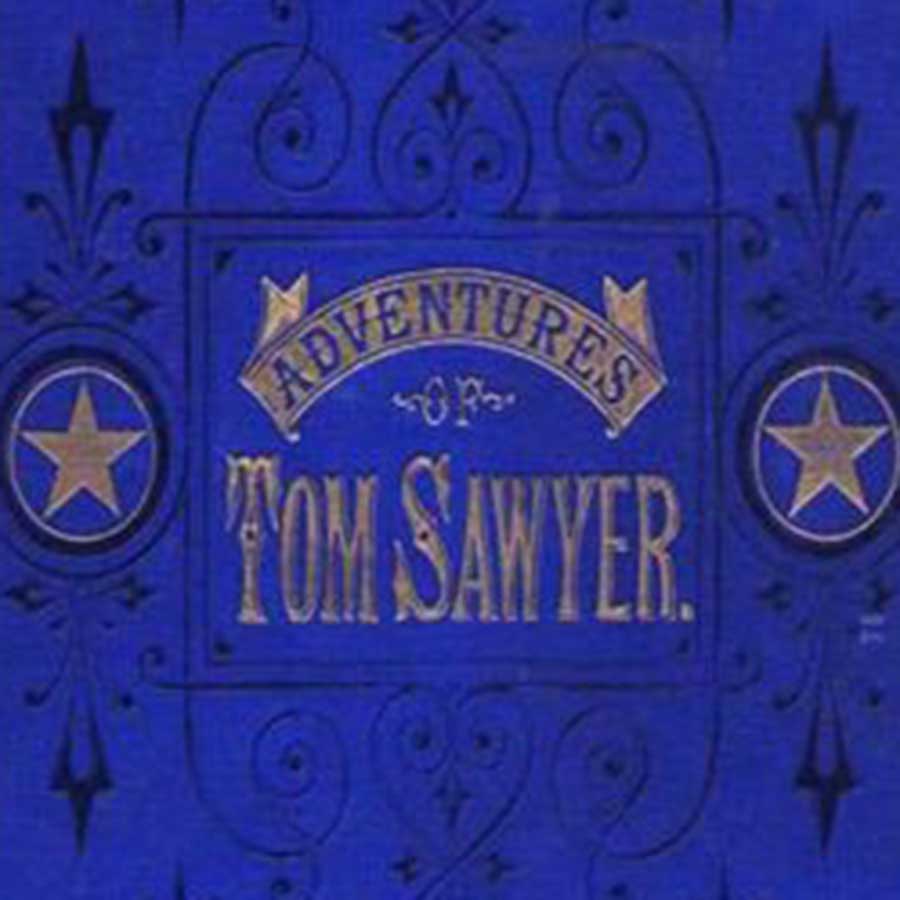 The Adventures of Tom Sawyer

From the Preface: “Most of the adventures recorded in this book really occurred; one or two were experiences of my own‚ the rest those of boys who were schoolmates of mine. Huck Finn is drawn from life; Tom Sawyer also‚ but not from an individual – he is a combination of the characteristics of three boys whom I knew‚ and therefore belongs to the composite order of architecture… Part of my plan has been to try to pleasantly remind adults of what they once were themselves‚ and of how they felt and thought and talked‚ and what queer enterprises they sometimes engaged in.”

The third of the five travel books authored by Mark Twain. A Tramp Abroad contains the experiences of Twain’s “walking” tour of Germany‚ Switzerland and France. Typical of Twain’s style in drafting travel novels‚ A Tramp Abroad places Twain as the narrator of an oftentimes uninformed American tourist visiting and discovering the mysteries of the European continent – a wonderful satire for those who have visited Europe or are planning a trip to “the continent.” 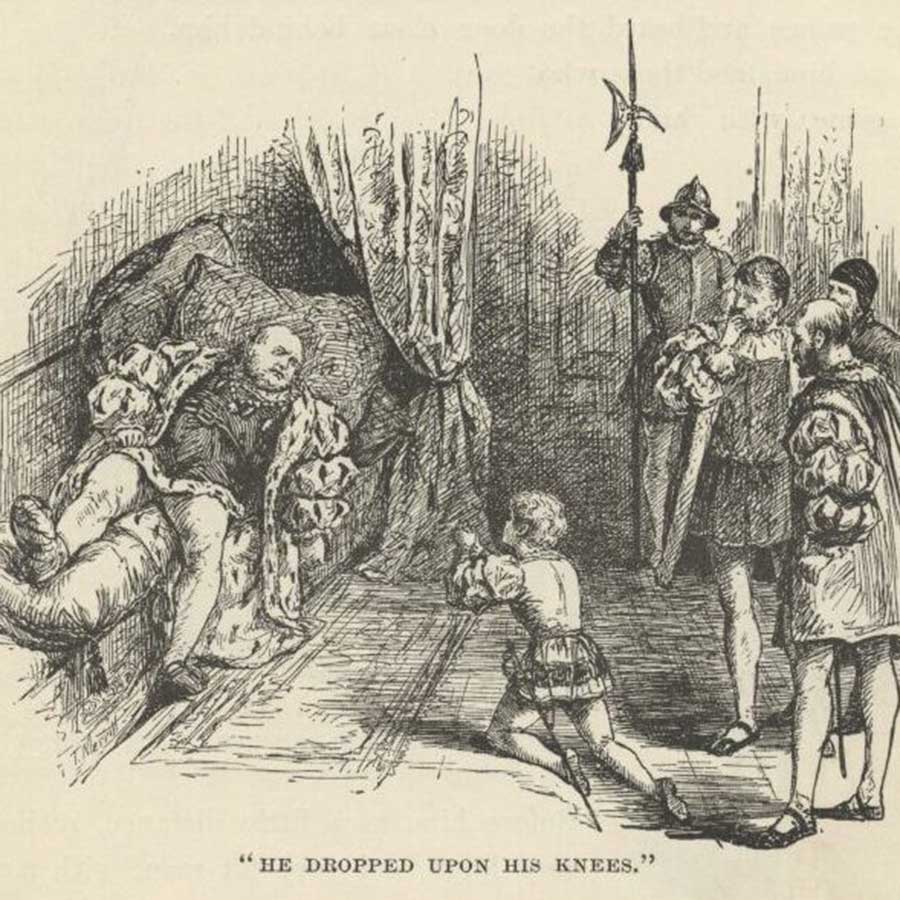 The Prince and the Pauper

Edward Tudor and Tom Canty are the same age and share the same features‚ but one of them is a pauper’s child and the other is the heir to the throne of England. When chance brings the boys together‚ they decide for fun to switch clothes‚ but fate suddenly casts them into each other’s worlds. Tom learns what is to be caught in the pomp and folly of the royal court and the young prince learns what it is to survive in the lower depths of 16th-century English society. Through the switched identities Mark Twain has fashioned both a scathing attack on social hypocrisy and injustice‚ and an irresistible comedy imbued with the sense of spirited play that belongs to this creative period. 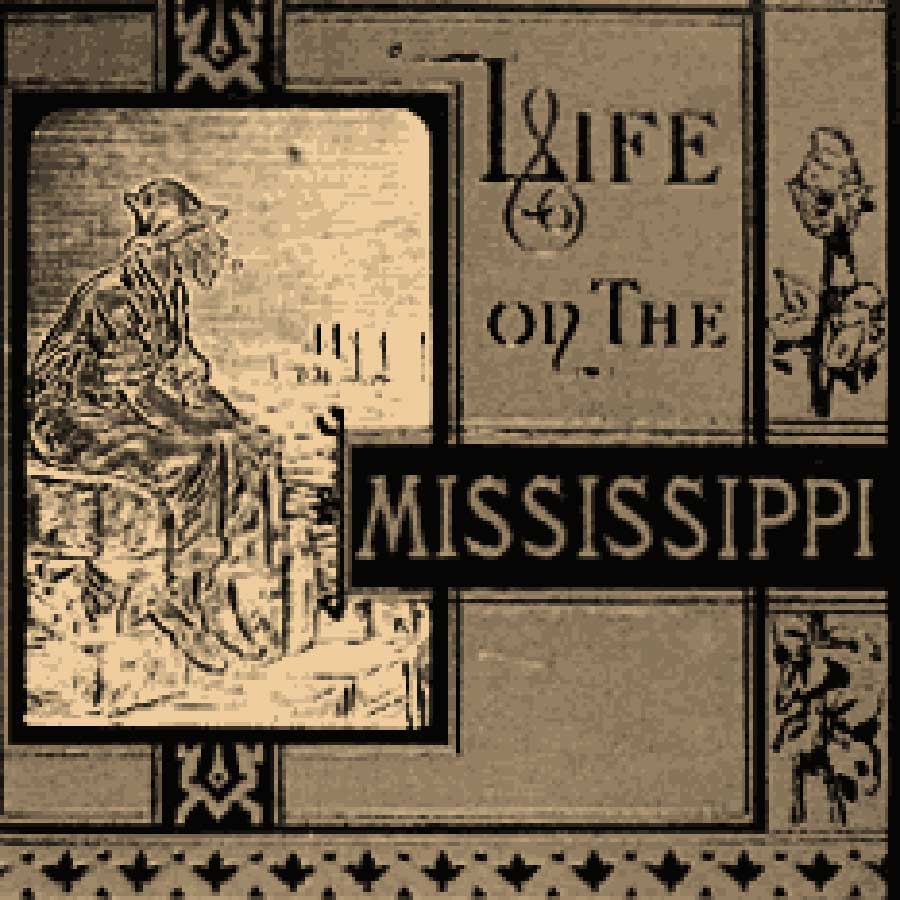 Life on the Mississippi

This was Mark Twain’s seminal work on the river that gave birth to much of his most successful fiction. Entertaining‚ yet enlightening‚ Life on the Mississippi is a textbook on the history‚ life and lore of the Great River during the 19th century‚ but also a primer on the “science” of the piloting the Mississippi during the heyday of the great steamboats that once traveled the greatest inland waterway of America. 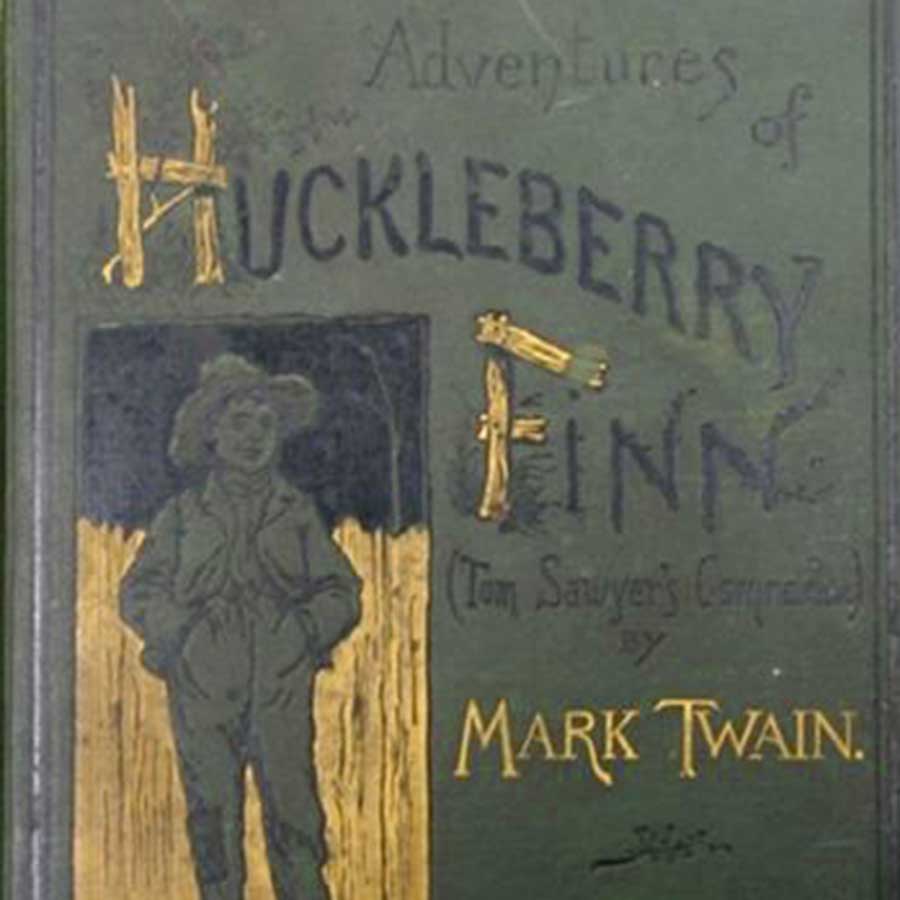 Mark Twain’s classic novel‚ Adventures of Huckleberry Finn‚ tells the story of a teenage misfit who finds himself floating on a raft down the Mississippi River with an escaping slave‚ Jim. In the course of their perilous journey‚ Huck and Jim meet with adventure‚ danger‚ and a cast of characters who are sometimes menacing and often hilarious. Although the story was mostly written in the 1880s‚ it is set in the time of slavery prior to the Civil War. Twain uses Huck’s predicaments to illustrate the failure of reconstruction in the post-Civil War South.

Hank Morgan‚ superintendent at the Colt Firearms Factory in Hartford‚ Connecticut‚ is knocked unconscious in a fight. He wakes up in the time of King Arthur. Hank introduces such innovations as schools‚ factories‚ bicycles and gunpowder. At first‚ Hank is convinced that his ideas will do the citizens of Arthur’s court good‚ but as he takes command he turns more and more to violence and loses control of the results of his entrepreneurial efforts. A Connecticut Yankee was one of the last large-scale novels Mark Twain produced and its dark‚ cynical themes foreshadow ideas he would delve into more deeply in much of his later work.

The Diaries of Adam and Eve

Extracts from Adam’s Diary (1893) is a witty and whimsical look at the Biblical creation story and Adam’s adventures as he explores his new world. Twain uses this work as a forum to express his irreverent thoughts on conventional religion. By contrast‚ Eve’s Diary (1905) is Twain’s tribute to his beloved wife‚ Livy. The story from Eve’s viewpoint speaks eloquently of kindness and human goodness – overall‚ a commentary on Livy’s gentle nature. Adam’s last words at Eve’s grave are: “Wheresoever she was‚ there was Eden.”

The Tragedy of Pudd’nhead Wilson

A murder mystery set in a town on the Mississippi featuring strong and weak characters‚ some black and some white. The book has a strong female character‚ unusual in Mark Twain’s writing. While trying to solve the mystery you will enjoy reading great quotes at the beginning of each Chapter from Pudd’nhead Wilson’s Calendar such as: “Why is it that we rejoice at a birth and grieve at a funeral?”

Personal Recollections of Joan of Arc

Twain said he regarded this work as his best: his version of the story of the Maid of Orleans who‚ in 1429‚ at the age of 17‚ led a French rebellion against English domination. She was tried for witchcraft and heresy by French priests‚ supporters of the English‚ and burned at the stake. Twain viewed Joan of Arc as his bid to be considered a “serious” writer. Joan is considered to be Twain’s ideal woman: gentle‚ selfless and pure‚ but also courageous and eloquent. Twain’s Joan is said to be modeled after his oldest daughter‚ Susy‚ who died tragically three months after Joan of Arc was published.

Twain’s fifth and last travel book is a relatively straightforward narrative of his round-the-world lecture tour of 1895-96. It includes discussions of Australian history and economic development‚ Asian culture‚ British rule in India and South African politics. It contains many humorous passages‚ but is generally more serious in tone than the author’s earlier travel works.

An adult tale set in a medieval European village‚ The Mysterious Stranger tells of some boys who encounter a young stranger who performs wonderful feats of magic and shows the boys different times and places in mankind’s history. The stranger turns out to be a nephew of Satan. In this work‚ not published during his lifetime and not in its entirety for decades after his death‚ Twain explored and explained his feelings about religion and faith‚ good and evil.