Nook Farm was a neighborhood on Hartford’s western edge that until the mid-nineteenth century had been mostly farmland. In Clemens’ time it had been developed into a residential area of large homes on extensive‚ park-like grounds‚ interspersed with meadows and ponds. It got its name from bend‚ or “nook‚” in the Park River‚ which bordered the area. (Today the Park River has been rerouted through an underground conduit.)

In 1853‚ two movers and shakers in Hartford‚ Francis Gillette and John Hooker‚ bought the land and began selling lots to their friends and family. In this way Nook Farm became an exclusive neighborhood whose residents were known for scholarship‚ progressive thought and efforts for social reform. 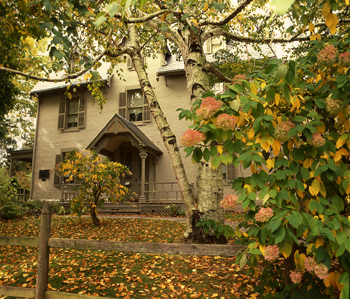 It was also home to Harriet Beecher Stowe (Uncle Tom’s Cabin)‚ the best-selling American author of the nineteenth century; Charles Dudley Warner‚ a travel writer‚ essayist‚ editor of The Hartford Courant and collaborator with Mark Twain on the book‚ The Gilded Age; Joseph Hawley‚ Civil War general‚ newspaper owner‚ Governor‚ Senator‚ and national Republican figure; Isabella Beecher Hooker‚ a dynamic and nationally known advocate of votes for women; and William Gillette‚ the actor‚ who popularized the role of Sherlock Holmes on the stage and in later life built Gillette Castle on the Connecticut River.