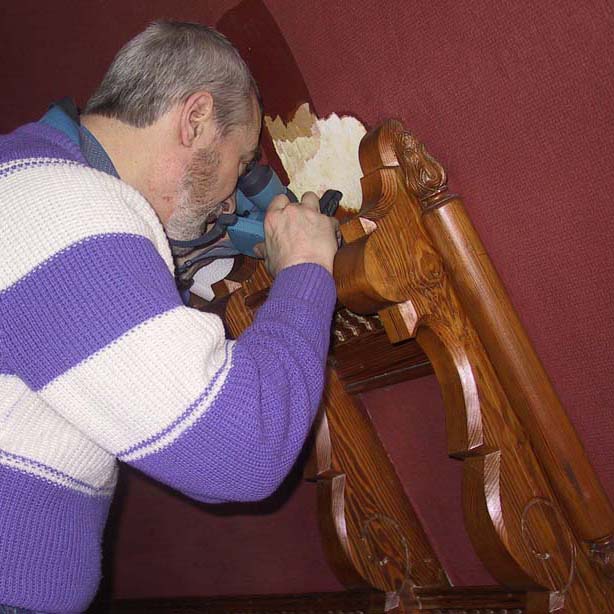 Guided by a rigorously researched historic furnishings plan and painstaking analysis of physical evidence (e.g., historic mortar, wallpaper fragments, old carpet tacks and long-forgotten paint), The Mark Twain House & Museum restored the Billiard Room from floor to ceiling in 2003-04. In addition to the grand billiard table once owned by Twain, resting on a reproduction 1874 “Kinver Turkey” pattern carpet and illuminated by a restored gasolier, the details help tell the story of the room. Open books, papers scattered on the billiard table and floor, and notes tacked up on the wall suggest Twain was active as well as messy when he wrote.

The fireplace proved to be an exceptionally challenging architectural feature to restore. As early as the 1960s, when researchers first removed the existing brick face of the fireplace, they found a chimney mass of distressed brick, probably blackened by years of smoke migrating through the masonry joints. After much consideration, curators for this initial restoration decided that the best treatment for this feature was a fireplace face of ceramic tile mirroring the hearth (thought to be original), and wood mantel surround.

Curators at The Mark Twain House have always believed that the hearth, composed of green and red ceramic tiles, was original to the room when Twain kindled his fires there. The floral motif of the glazed green border tiles was a common Victorian motif and the earliest photographs of the room-from the 1950s show the tiles in place. The restoration confirmed our assumptions. Restoration work begun in 2003 revealed new physical evidence which, coupled with the only known Twain-era depiction of the room, allowed the Museum to more accurately portray the corner of the Billiard Room where Twain sat down to write, confirming the installation of a bookshelf during Twain’s occupancy, which was recreated. 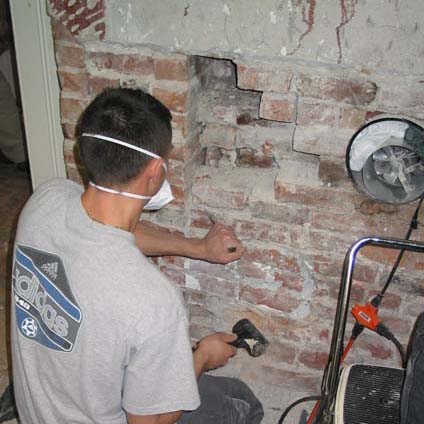 In 2003 and 2004, in anticipation of restoring the first floor of the Servants’ Wing (previously used for museum offices), building archaeologists worked throughout the house searching for clues to work done in 1881 by masons, bricklayers, plumbers, painters and carpenters. The team of specialists discovered what the Twain-era floors looked like, the color the walls were painted, how the woodwork was finished, and how the rooms were partitioned. They discovered features long hidden and forgotten, such as a dumbwaiter and pass-throughs, and the location of sinks, gas light fixtures and speaking tubes. The cooking range space was carefully identified and a period range installed. Restoration work was completed in the butler’s pantry, back pantry, kitchen, dumbwaiter, scullery, servant’s hall and passageway to the Dining Room and the restored Butler’s Pantry and kitchen area is open to the public as part of our regular tour of the House. 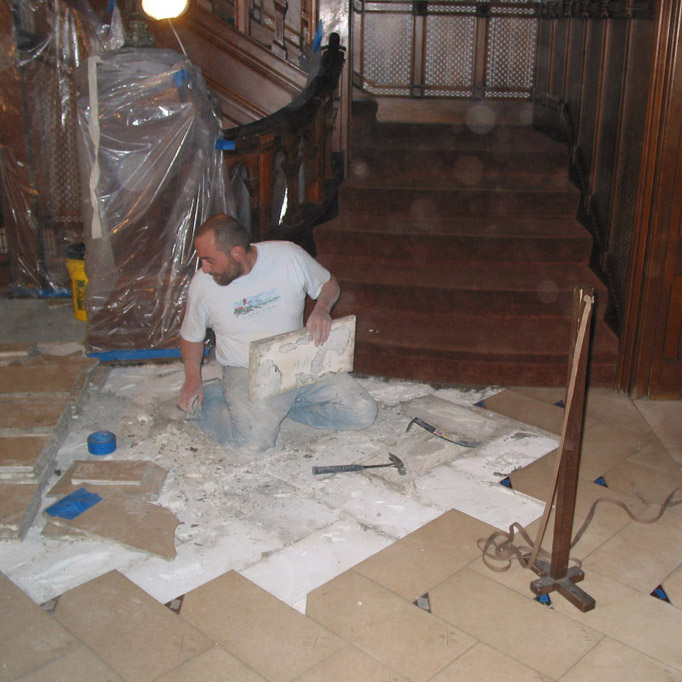 Restoration work on the entry hall marble floor began in February 2003 and was completed in May 2003. As an architecturally significant component of the house, we took a restoration approach to the floor: Repairing and cleaning what was there, unless not repairable, in which case we matched the old material in composition, design and color. A treatment plan based on these principles ensured contractors would properly restore the floor.

To compensate for an uneven brick sub-floor and varying depths for the substrate, the contractors installed on top of the substrate a crack suppression material. This material will prevent movement of the substrate from being transmitted to the tile in the form of cracks. The new floor installation system, on which the restored marble tiles were fastened, was designed to accommodate the growing visitor traffic for years to come. 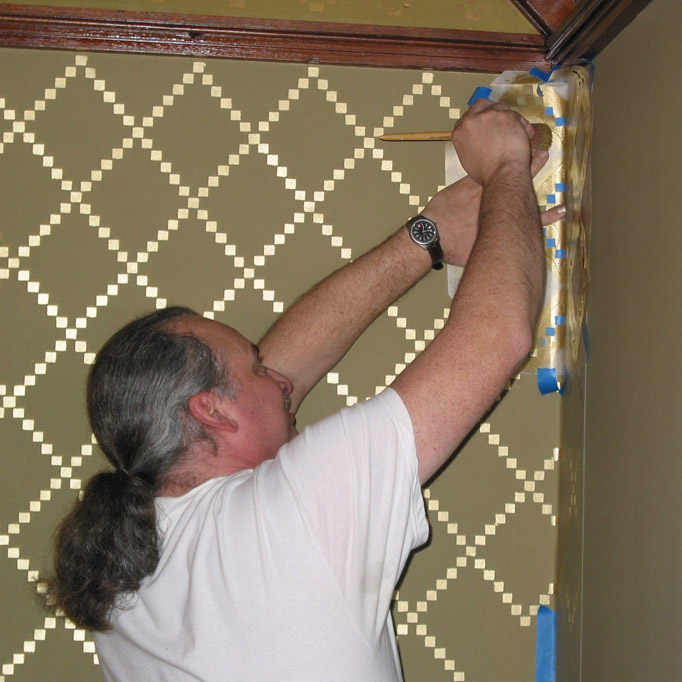 The distinctive stencils throughout the hallways on the second and third floors of The Mark Twain House are another feature of the Louis Comfort Tiffany interior decoration of 1881. The normal wear on the stenciling, which was refinished during the original restoration of the house in the 1960s, necessitated a re-stenciling in 2003-04, as well as the touch-up of the decorative painting and the refinishing of woodwork.

Master stencil artist Leo Sans, a German-born painter who was trained in traditional painting and stenciling methods more than half a century ago, worked on the original restoration in the 1960s. In 2003, he returned to The Mark Twain House with his son, Matt, to restore the luster to the hallway stencils and woodwork.

The colors of the painted and stenciled canvas applied to the walls had become particularly faded in the 3rd floor hallway. The stencil patterns there originally (both in the Clemens period and after the 1970s restoration) were gold bronze, appearing gold in color. The original appears dark green over the lighter green field earlier stencil pattern colors now appear bronze due to fading caused by the sun. Both colors started out looking gold. 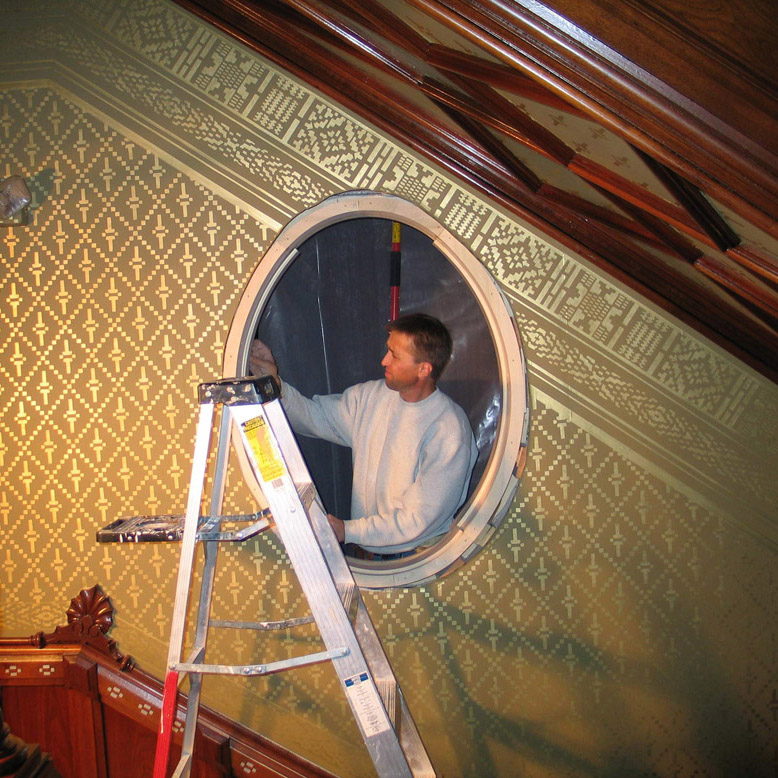 During the long process of restoration we sometimes discover new information about the house, which we need to carefully evaluate to determine if it is a Clemens-era feature or one added by later occupants of The Mark Twain House. The oval interior window is a great example of this process.

Evidence tells researchers that at one point in the history of the house an interior window was prominently featured in the main stairwell, between the second-floor hall and Susy Clemens’ room. 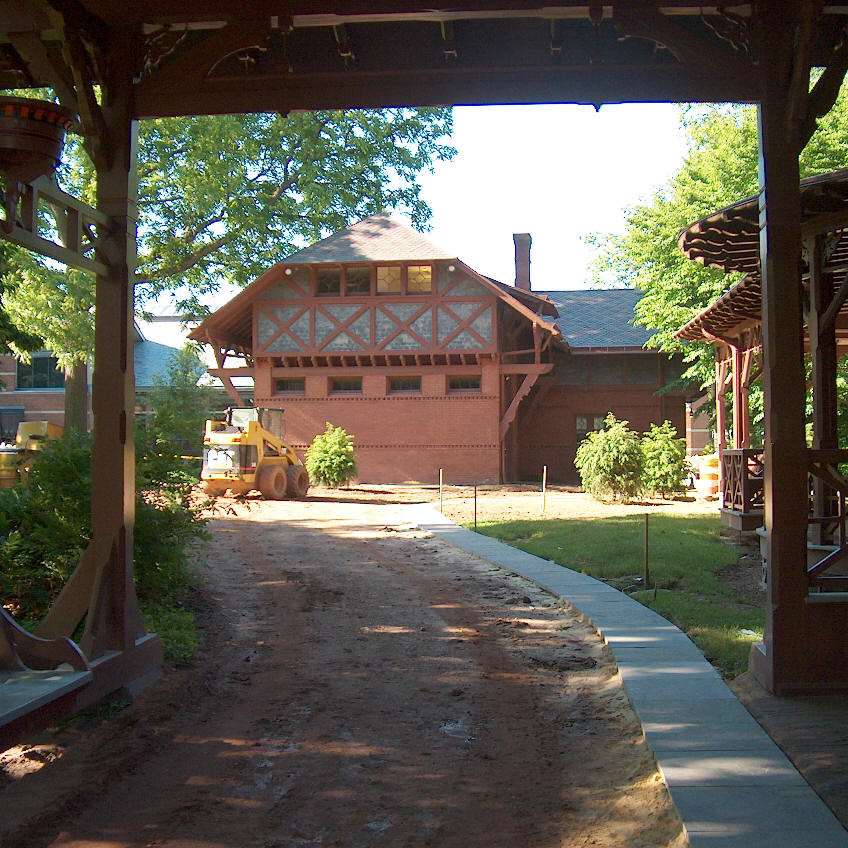 Based on contemporary photographs and accounts from Twain’s time, we have restored the gravel driveway, bluestone sidewalk that travels along the driveway to the Carriage House, as well as such plantings as vines and trees. The goal is to replicate the historic landscape of the 1874-1881 period.

All historic gravel driveways required (and still do!) painstaking maintenance: raking the material to remove large stones and promote effective water drainage, applying an occasional top dressing of gravel and ensuring the lawn shares a distinct and tidy border with the driveway.

With this work completed, the Mark Twain House and Carriage Barn are once again ensconced in a natural environment more in keeping with what Twain and the architect, Edward Tuckerman Potter, created in 1874. 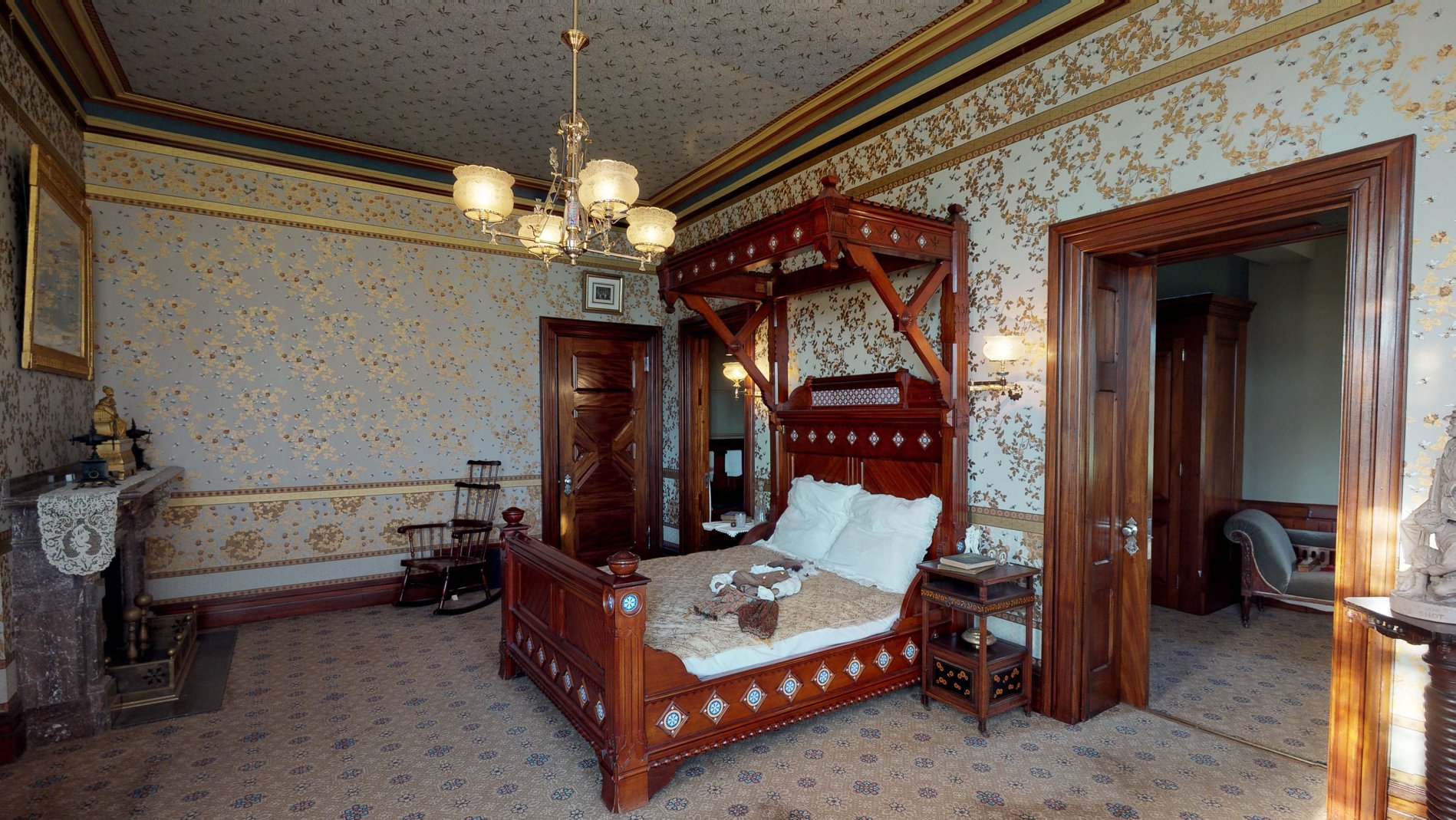 The Clemenses’ best guest suite was made up of a bedroom, dressing room, and bathroom with every modern convenience. W.D. Howells called it a “royal chamber,” and Grace King compared it to the castle in “Beauty and the Beast.” It was a Green Room for the family theatricals and a gift-wrapping station for Livy’s charitable work. The restoration, made possible by the 2014 state bonding grant, involved a fascinating bout of detective work and a hunt for authentic fixtures and decor, ranging from a final decision on whether the bathtub had a shower, to what year Candace Wheeler produced her honeycomb wallpaper. An extraordinary, research-driven architectural firm and some legendary craftspeople have aided in this effort.

We worked with David Scott Parker Architects, an architectural firm that specializes in historic preservation and has extensive background knowledge of Louis Comfort Tiffany and the Associated Artists who are known to have decorated the bedroom. Little is known about the decoration of the suite, as the contract between the Clemenses and Associated Artists states that the bedroom will have its “walls and ceiling papered.” It is difficult to determine if the dressing room and bathroom were decorated by them as well. The firm used their knowledge of Associated Artists and the practices of the time period to determine the best approximation of how the room may have been decorated.