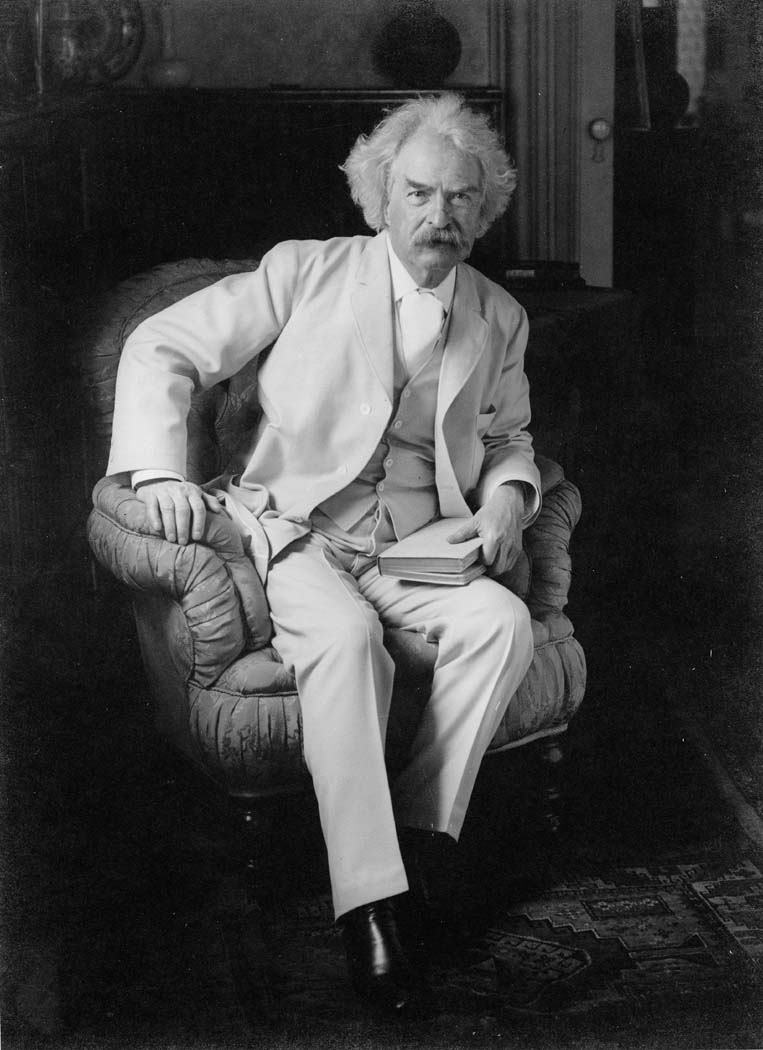 Mark Twain: I have sampled this life

In this gallery, you’ll learn about the life and work of one of the most celebrated authors in American literature, Samuel Clemens aka Mark Twain (1835-1910). More than an author, Twain was a journalist, lecturer, entrepreneur, and inventor who was infamous for his complex humor and memorable characters, as well as focusing on societal issues of that time slavery, poverty, and class stratification. Twain wrote his most important works while living at his Hartford home, such as The Adventures of Tom Sawyer (1876), The Prince and the Pauper (1881), and The Adventures of Huckleberry Finn (1884), which helped him acquire the title of one of our nation’s most defining cultural figures. Objects on view include: first editions of Twain’s books, spectacles worn by Twain, and the infamous Paige Compositor. 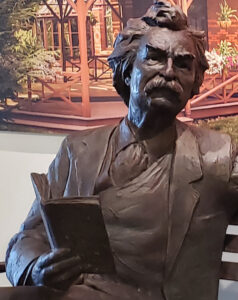 Created by artist Gary Lee Price, this bronze bench offers you the opportunity to sit with Mark Twain. Don’t miss your opportunity to take a selfie with the Mark Twain and be sure to tag us in your photos on Instagram at @themarktwainhouse using #SittingWithSam 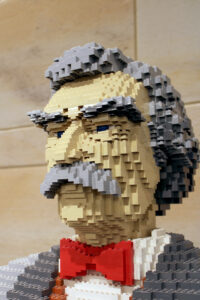 Built by LEGO master builders located in Enfield, Connecticut, LEGO Mark Twain stands 6-feet tall and weighs 150-pounds. The sculpture has been welcoming visitors to the Mark Twain House since 2009. Don’t miss your opportunity to take a selfie with the LEGO Mark Twain and be sure to tag us in your photos on Instagram at @themarktwainhouse

LEGO Mark Twain is on loan from LEGO Systems Inc. 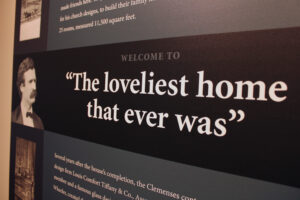 Whether it is your first time visiting the Mark Twain House or your 100th, the stunning panels at the entrance to the Museum Center will help prepare you for your house tour. You’ll be introduced to the House and the members of the Clemens family who lived here: Sam, Livy, Clara, Susie, and Jean.

The panels were designed by Joseph Philippon and installed in spring 2020 thanks to a CT Humanities Grant. 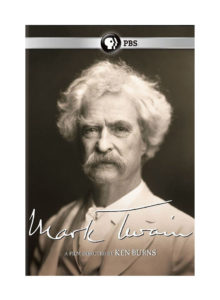 The 23-minute video is a great introduction to the life of Mark Twain, the Clemens family, and the House itself. The video is run on a loop and can be viewed by any visitor before or after their guided tour of the House.

This metal mobile sculpture by Karen Rossi is her interpretation of Twain’s World, a public project created in the spring of 1995 by Northeast, The Courant’s Sunday magazine, that explores the rich cultural history of Hartford and promotes the city as a tourist destination.  Ms. Rossi, who’s studio is in South Windsor, says: “Hartford is inextricably part of who I am, what I create, and how I create it. I was born, schooled, raised, and am now a business owner in Hartford County – and the city’s past, present, and future hold the fabric of my life. When asked to produce sculptures illustrating Northeast editor’s Larry Bloom’s vision for the cultural revitalization of Hartford, I celebrated the opportunity.” 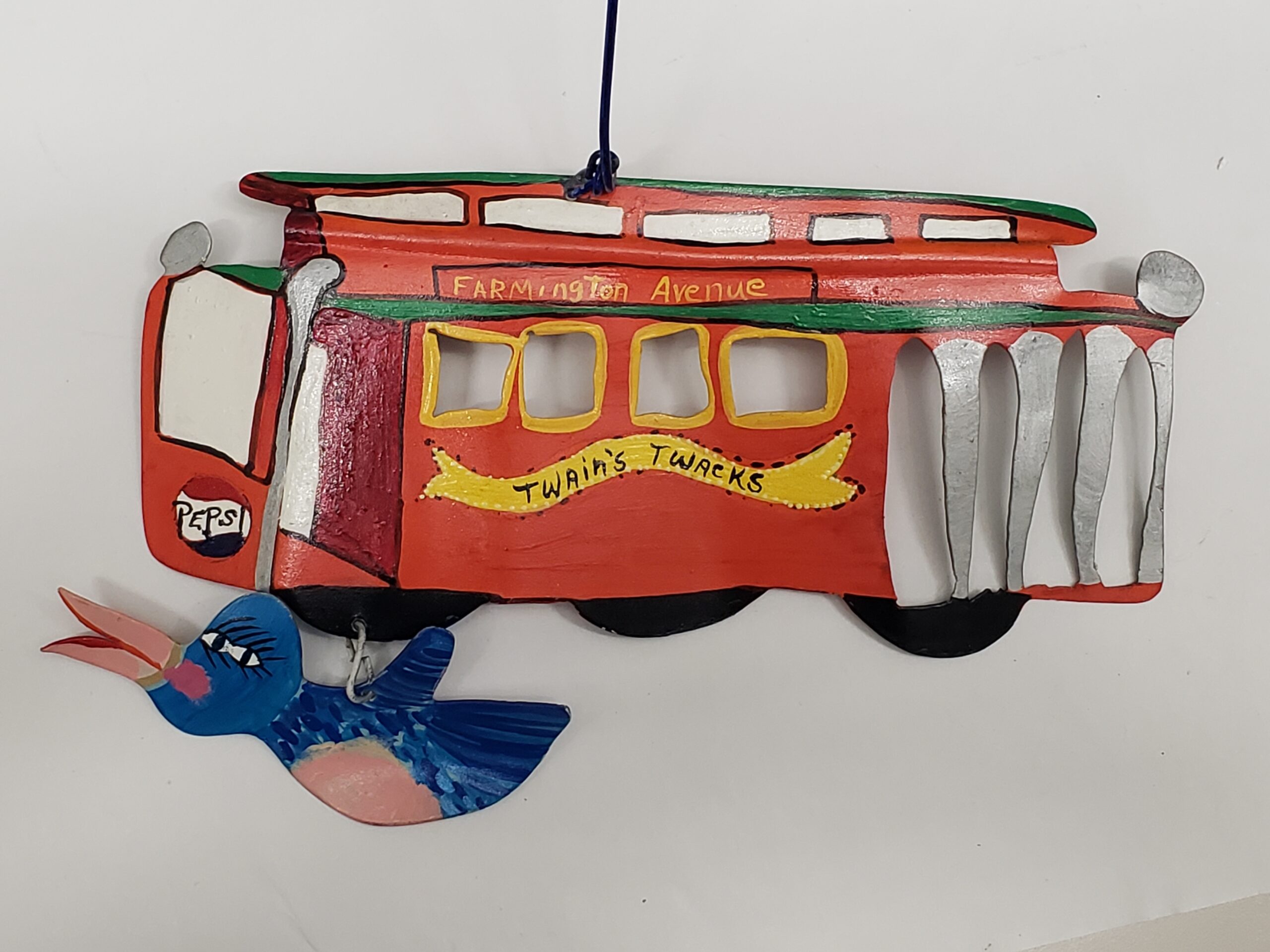 The mobile has about 40 different figures, can you identify them all? 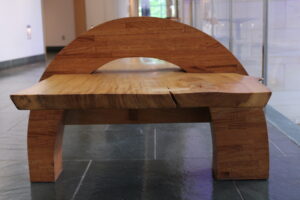 This bench was fabricated by City Bench of Higganum, CT, from the largest American elm in Connecticut. The tree grew on the Coulter property, a generational farm in Suffield. In the fall of 2009, the tree had to be brought down after becoming a hazard in its location. The artisans from City Bench counted 148 growth rings when they examined the tree’s massive trunk. City Bench’s mission is three-fold: to create beautiful and sustainable furniture using salvaged urban trees, create an artistic and cultural hub employing local craftspeople; and maintain the vitality of the urban forest. 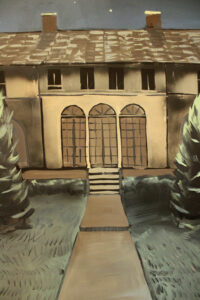 Bontorno served as caretaker of Quarry Farm, the home of Susan and Theodor Crane in Elmira, New York. The Clemenses spent their summers at this home during the 1870s and 1880s. The paintings represent Samuel Clemens’s birthplace, a small clapboard farm house in Florida, Missouri, and the home where he died, the impressive Italianate mansion he named “Stormfield” in Redding, Connecticut. Oil on cloth paintings by Nick Bontorno, 2009.  Gift of Patty and John Pascal, in loving memory of Sophia M. and Joseph R. Pascal.