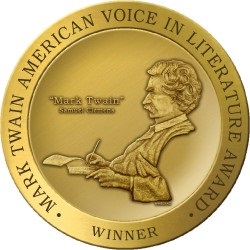 The Mark Twain House & Museum Opens Submissions for the 2019

The Mark Twain House & Museum announces that it is accepting submissions for the 2019 MARK TWAIN AMERICAN VOICE IN LITERATURE award.

The MTAVL award goes to the work of fiction published during the calendar year that best exemplifies or expresses a uniquely American voice, much in the way that Twain’s Adventures of Huckleberry Finn does. Jennifer LaRue, director of writing at The Mark Twain House & Museum, says, “We’re not looking for works that mimic or pay homage to Twain, but rather those that speak in an authentic American voice about authentic American experience. It’s one of those things that’s kind of hard to define – but you know it when you see it.”

The honor comes with a $25,000 cash prize. Author David Baldacci, a trustee and generous supporter of the museum, is the impetus behind and benefactor the MTAVL.

This year’s finalists will be judged by Ron Charles, book critic for The Washington Post, Olivia White, former executive director of the Amistad Center for Art & Culture, and Carole Goldberg, book columnist for The Hartford Courant.

The museum is accepting submissions from September 1 to January 15, 2020. The winner will be announced in mid-April, and an award ceremony will be held at Mark Twain’s Hartford home in mid-May.

The Mark Twain House and Museum will accept submissions until January 15, 2020.

1. Three copies of a single published book must be sent to:
The Mark Twain House
65 Forest Street
Hartford, CT 06105

Submissions are accepted from publishers, authors, librarians, agents, instructors, and “others” as indicated on the submission form. Please include the $50 application fee.

Contact information for both the publisher who is submitting and the author must be included on the submission form (name, address, phone, and email).

Novels and short-story collections will both be accepted. Self-published works will not be accepted.

Centered around the restored Hartford, Connecticut home where American author Samuel Clemens — Mark Twain — and his family lived from 1874 to 1891, The Mark Twain House & Museum is a private, 501(c)(3) nonprofit organization whose mission is to foster an appreciation of the legacy of Mark Twain as one of our nation’s defining cultural figures and to demonstrate the continuing relevance of his work, life, and times. Twain wrote his most important works, including Adventures of Huckleberry Finn, The Adventures of Tom Sawyer, and A Connecticut Yankee in King Arthur’s Court, during the time he lived in the house, and he considered those the happiest, most productive years of his life.