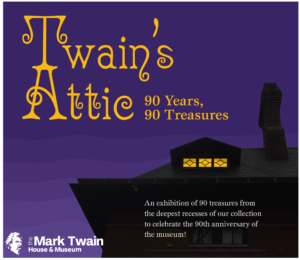 Please join us Thursday, March 21, 5:30 p.m., for the opening of Twain’s Attic, Ninety Years, Ninety Treasures, a new exhibition at The Mark Twain House & Museum, celebrating the 90th anniversary of the organization that saved, and still preserves, the home of one of America’s greatest writers.
Take a peek at 90 objects that cover the saving of the house and our founding; Nook Farm players; Tiffany, pop culture; the Langdon family; and Clara Clemens and Ossip Gabrilowitsch (with their home movies). Also artworks, letters, books, and signatures.
In 1929, Katharine Seymour Day, grandniece of Twain’s neighbor Harriet Beecher Stowe, helped persuade the Connecticut General Assembly to establish the Mark Twain Memorial and Library Commission. The Friends of Hartford lobbied the state for many years to stop the demolition of the historic Twain House.
The house officially opened as a museum in 1974, 100 years after Samuel Clemens and his family took possession of their new Victorian-era mansion, where they lived until 1891.
Refreshments will be served at the opening in Hal Holbrook Hall. Remarks begin at 6 p.m. The show runs through January, 2020.
RSVP here.
Twain’s Attic is sponsored by United Technologies Corporation.