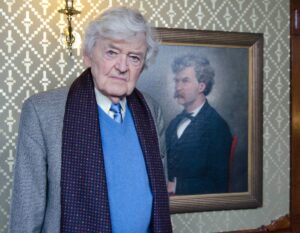 The Board and Staff of The Mark Twain House & Museum wish to extend our condolences to the family and many friends of Hal Holbrook, the great actor who passed on January 23. So well-known and beloved for his vivid, delightful, funny, and principled portrayal of Samuel Langhorne Clemens — our Mark Twain — he had a long and very personal attachment to the house in Hartford.

He first portrayed Mark Twain on stage in the early 1950s and got his big break performing his embodiment of Twain on the Ed Sullivan show in 1956. Then, just a few weeks later, he did a fundraiser for the Mark Twain House at a local school. The tributes in later years moved indoors to the library of the house, but as his fame and his Broadway show Mark Twain Tonight! prospered, his Hartford performances had to move to local theatrical venues. In 2015 – nearly 60 years after his first appearance to aid the house – he celebrated his 90th birthday onstage at The Bushnell, lauded by the governor of Connecticut and other dignitaries in a surprise tribute after the performance.

“Hal loved this place,” said Pieter Roos, Executive Director of The Mark Twain House & Museum. “Twain is, more than any other author in history of whom I can think, still alive to us today. Much of the reason for that is Twain’s own humanity, humility, and humor, but some part, at least in the last half of the 20th century, is also due to Hal Holbrook.”

Previous directors have weighed in as well. Cindy Lovell, who had a long friendship with Hal and took every chance she could to see his performances, said, “Hal was an incredible Twain scholar. He never stopped researching and discovering new material, so his performances were always relevant and profound. He was also one of the kindest and most generous people I’ve ever known.” And Jeffrey Nichols, who welcomed Hal to Hartford for a 2010 performance, said, “One of the great pleasures of working at The Mark Twain House & Museum was having the opportunity to meet Hal Holbrook. His incredible knowledge of Twain and his acting skill came together to create a spellbinding performance that made Twain live and breathe again.”

In a written tribute to the Hartford house, Hal said: “What can I say about the Mark Twain House except that I love it and its atmosphere? I have been fortunate enough to see its reconstruction from near the beginning and to watch its charm and dignity come back in polished butternut and gold design.…In Mark Twain’s house, its design inspired in places by his own mischievous vision, the memories of its former great tenant and his family seem to whisper there in the rooms and on the porches.”

Over the many decades of his support of the house and museum, Hal reflected that charm and dignity, and his performances reflected his own “mischievous vision” as well as that of his great predecessor and model. We here at the museum – and in the community of Twainians at large, and indeed in every corner of the America he loved – will miss Hal Holbrook terribly.